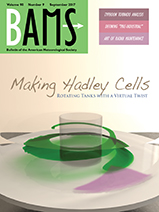 April, 2015 – Diving into Ocean Science  –  Oceans at MIT was thrilled to participate in the Cambridge Science Festival Ocean’s Day at the MIT Museum, featuring rotating fluids experiment and other ocean activities.

May 29, 2014  – Weston Middle School visits MIT.  A group of middle school students (6th grade) from the Weston Public schools visited PAOC, as part of their annual trip to MIT. Lodovica Illari, Allison Wing and grad students, Morgan O’Neill, escorted the group on the top of the Green Building to measure the wind speed and direction. Profs John Marshall and Glenn Fierl together with grad student Yavor Kostov used simple laboratory experiments to show the students the effect of rotation on weather patterns.  It was the largest group (42 students + teachers) visiting the Fluid lab. This required careful planning and a lot of helping hands. All of us enjoyed the interaction with the group. The students themselves seemed to like the experience – see here.

May 22, 2013  – Weather in a Tank on the Weather Channel – PAOC grad student Vince Agard  explains how the Earth’s rotation is effecting weather…

April 13, 2013  – Cambridge Science Festival. PAOC staff, post-docs and students attended the festival at the MIT Museum  They performed several rotating fluid experiments, including the general circulation experiment and the Ekmam pumping experiment to illustrate the physics of weather systems and of the garbage patch. Staff answered questions about the Weather in a Tank project and shared interesting stories about Oceans at MIT, a new website providing weekly reporting on the ocean research at MIT and WHOI.

March 8, 2013  – MIT Museum – Nautical Night. PAOC post-docs and students participated in a Nautical Night at the MIT Museum, celebrating MIT and the sea. The science of the Great Garbage Patch was illustrated by performing the Ekman pumping experiment – see here.

November 14-19, 2012  – Saraceno: Conversations on Atmosphere – MIT visiting artist Tomas Saraceno was exposed to some of the weather in a tank experiments, illustrating the basic of the general circulation of the atmosphere. Saraceno showed great interest in these simple rotating fluid experiments. Fluid circulation often form circuit loops similar to the kind of Saraceno creates in his installations.

September 19, 2012  – Tom Bogdan, UCAR president visits MIT– during his visit Tom met with several PAOC faculty to discuss research collaborations between MIT and NCAR.  He also met with Lodovica Illari to discuss MIT education collaboration with NCAR and Unidata. Lodovica illustrated the Weather in a Tank project by performing a “live” experiment of the general circulation. Tom very much enjoyed the demo.

August 22-26, 2012  – MIT – DEAPS: Discovering EAPS – MIT freshman pre-orientation program.  For the sixth year, Lodovica Illari led an exploration program in ‘Weather and Climate”. This year the program was extended to 5 days with a 2 day trip to Mt Washington, NH. The students seemed to enjoy the extended program – see DEAPS 2012: Extreme weather and Climate.

February, 2012 – The following article The Effectiveness of Rotating Tank Experiments in Teaching Undergraduate Courses in Atmospheres, Oceans, and Climate Sciences – appeared in the February issue of the Journal of Geoscience Education.  The article describes the results of three years of quantitative evaluation, involving more than 700 students. The work was done in collaboration with Kathleen Mackin, the independent evaluator of the project, and with Nancy Cook and Philip Sadler from the Science Education Department at the Harvard-Smithsonian Center for Astrophysics – read pdf.

March 26, 2011  – Women in Science and Math Conference. Lodovica Illari, attended the annual Women in Science Conference at Algonquin Regional High School, Northborough, MA. During a day of motivational presentations and interactive workshops geared to girls in grades 6-8, around 100 students had the opportunity to learn about and explore career options in the fields of science, math and technology. Lodovica presented several Weather in a Tank experiments using a portable turntable to demonstrate the controlling effect of rotation on weather – see here.

August 24-27, 2010  – MIT – DEAPS: Discovering EAPS – MIT freshman pre-orientation program.  For the fourth year, Lodovica Illari led a three day exploration program in ‘Weather and Climate”. The program involved lectures, meteorological activities, rotating fluid laboratory experiments and an overnight trip to the MT Washington Observatory. The students seem to enjoy all of the activities, in particular, the interaction with the rotating fluid experiments. See photos of the 3 days.

Spring-Summer 2010 – JHU: Taylor columns experiment et al – Robbie Nedbor-Gross and Louis Dumas, Johns Hopkins students in the Earth and Planetary Science Department, worked with Prof Tom Haine on how to improve the Taylor Columns experiment. They devised a light box to better visualize the flow and built a side-view camera stand to film the experiment from the side. For pictures of the apparatus and movies of the experiments see their wiki posting. The students also prepared a very colorful poster, summarizing all of the rotating tank activities at JHU – see JHU_poster.

May, 2010 – Einstein’s tea leaves  and pressure systems in the atmosphere – an article by Profs Amit Tandon (UMassD) and John Marshall (MIT), describing the classic experiment by Einstein and its connection to the atmosphere, appeared in the May issue of The Physics Teacher, Vol. 48, 292-295. See PDF.

March, 2010 – MIT: Weather in a Tank – an article by Morgan Bettex, describing our project, appeared in the MIT News – see here. Following the publication of the article, we have been approached by the MIT Museum about possible school activities and exhibits on rotating fluid.

November, 2009 – The following article “WEATHER IN A TANK”—Exploiting Laboratory Experiments in the Teaching of Meteorology, Oceanography, and Climate – appeared in the November issue of BAMS.

November 16, 2009 – 1 and 2 class visits MIT – A group of young school children (1 and 2 grades) from the Cambridge Public schools visited MIT, as part of their study of weather. Lodovica Illari and grad student, Angela Zalucha, and undergrad, Elizabeth Maroon, escorted the group on the top of the Green Building to measure the wind speed and direction – see photos. Two other grad students, Ryan Abernathey and Laura Meredith, used simple laboratory experiments to show the group the effect of rotation on weather patterns. All of us enjoyed the interaction with this young group. The children themselves seemed to like the experience. We received a lot of colorful thank you cards.

October 12, 2009 – Boston Museum of Science – “Understanding Climate” – Events – Lodovica Illari, Amit Tandon and Amala Mahadaven presented some fluids experiments at the  “Understanding Climate” – Events, organized by the Boston MOS, as part of the Earth Science Week. A sequence of talk and demonstrations on climate and related topics were presented during Sunday Oct 11.  Three experiments were illustrated: 1 – effect of density difference, 2 – effect of rotation, 3 – effect of rotation and temperature difference – see photo1, photo2 and photo3.  Several people attended the events, including several families with children.

August, 2009 – Quarknet science teachers at JHU – Thomas Haine gave 2 lectures on Ocean Circulation and Climate to a group of high school science teachers as part of the Quarknet particle physics outreach program, organized through Johns Hopkins Department of Physics and Astronomy. Demonstrations included nutating and precessing gyroscopes, and the dye stirring tank experiment. The Quarknet teachers were very interested in the effects of rotation on fluid flow, and the connection to ocean circulation and altimetry. Several teachers wanted to know how to use Weather in a Tank resources in their own classes. See photo.

June 8-12, 2009 – UNIDATA Workshop: Using Operational and Experimental Observations in Geoscience Education – Boulder, CO – MIT grad student Brian Tang gave a presentation, illustrating the use of rotating fluid experiments in undergraduate education – The workshop was very well attended with  81 participants, from four foreign institutions, 32 universities (foreign and domestic), and 3 US government labs. Brian’s presentation was well received. You can view a video of part of his presentation here.

April 25-May3, 2009 – Cambridge Science Festival and Sally Ride Festival – Lodovica Illari organized  two workshops targeting the public and middle-school students in which simple rotating fluid dynamics experiments were used to illustrate basic principles that underlie the formation of weather and its role in climate – see here.

April 20, 2009 – Lodovica Illari visited Millersville to discuss progress this semester and a possible extension of the Weather in a Tank to include a modeling component. Ajoy Kumar reported on his teaching of oceanography with ‘weather in a tank’ materials. Student surveys suggest that the experiments were well received. Millersville plans to continue to use the turntable as a demo in appropriate classes – read Lodo’s report.

Apr 15, 2009 –  “Building New Bridges” Colloquium  series, organized by the Chancellor of UMass D. Amit Tandon was invited to give an evening talk to a wide audience of academics and other invited members of the community, organized by the UMassD Chancellor.  Amit presented a talk entitled “The ocean: from rotating fluid to blooming planktons”. Amit chose to illustrate some of his themes using the ‘weather in a tank’ rotating table. The Ekman pumping experiment was used to show an example of wind driven motion and the role of upwelling in the ocean. The talk was very well received. John Marshall, Lodovica Illari from MIT and Amala Mahadevan from BU attended the seminar – see more.

Jan 11-15, 2009 – AMS 89th Annual Meeting in Phoenix – 18th Symposium on Education:  Amit Tandon (U Mass Dartmouth) presented  our project with a poster entitled:“Engaging undergraduates in Ocean-Atmosphere experiments: From teaching to research and outreach.” Carter Chamberlain, a student from U Mass Dartmouth, also presented  a poster- entitled “Illustrating Stratified Ekman Upwelling with Weather in a Tank “- see photo. Both posters were very well received.

November 5, 2008 – John Marshall  and Lodovica Illari visit Amit Tandon at U Mass Dartmouth and the Ocean Explorium in New Bedford – see photos. A  report of the visit is coming soon.

June, 2008 – U Mass Dartmouth Physics Seniors David Beesley and John Olejarz, together with Profs Amit Tandon and John Marshall, published a paper entitled: Coriolis effects on wind-driven ocean currents  in Oceanography, a quarterly journal of The Oceanography Society – see paper.pdf. The Ekman pumping and suction project is based on the ideas described in this paper.